Normally in Israel, Passover symbolizes the end of Winter and the start of Spring. Apparently, the weather gods have their wires crossed because it’s been raining fairly non-stop for the last three days, complete with lightening and thunder. 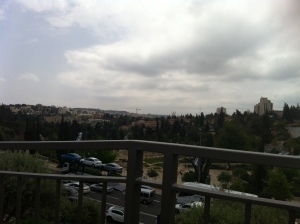 This only somewhat hampered our plans for the last days of Passover, in that it was really freaking cold in Jerusalem and we did not bring appropriate clothing. And then we got wet. But I’m getting ahead of myself…

When we last met, Nooshkin and I were planning to have a very uneventful day at home. Which is exactly what we did.
Except for that one part when I got Nooshkin a balloon and she let go of it while we were outside and because it was full of helium it floated away and she watched it and it resulted in the most horrendously awful tear-induced meltdown that there ever was.

The only reason there are no pictures is because A) I’m not horrible, B) I was busy comforting Nooshkin, C) I was busy telling her “I told you so” and “This is why you should listen to me, D) I was fascinated by how quickly the balloon flew away, E) All of the above, F) Everything except “A”.

In all seriousness, it was pretty bad. Complete with “But I want it!” while tears streamed down her cheeks. *sigh*

On Tuesday, Stinky Face joined us for a trip to Akko to meet up with some family. As Hubby had the car we took the scenic route on the train. 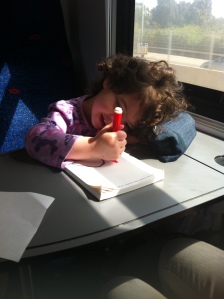 Drawing pictures for the cousins 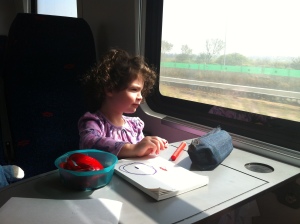 And enjoying the view

We spent the day walking around the Port and Old City of Akko, and by “day” I mean about three hours because the trip up to Akko took 2.5, and that long again on the way back. But still, fun was had and we got to see the water (Nooshkin was particularly happy about that), and it was hot enough to require sunscreen. 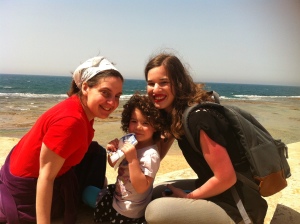 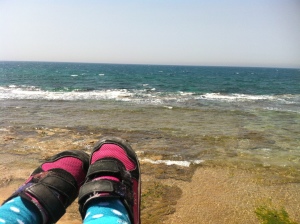 Hubby met up with us for dinner at a fancy-schmancy meat restaurant that we did not know existed except that it’s been around for a few years. It was very delicious and Nooshkin acted semi-appropriately.

Wednesday was spent at home recuperating, except that Nooshkin insisted on going to the park even though it was 100 degrees outside. Actually, yes – 100 degrees. Needless to say the AC was on when Hubby came home. 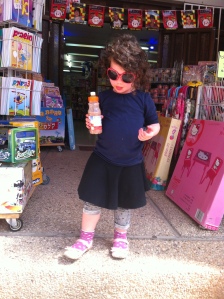 She insisted on dressing herself

Thursday was spent traveling to and hanging out in Jerusalem with Stinky Face. Due to the previously-mentioned weather we hung out indoors and tried to not get blown away. Nooshkin was kind of amused and bemused by the crazy weather, and reacted fairly appropriately by running around to keep warm.
We then made our way to Efrat, where we spent the remainder of Passover and Shabbat with our fake-family. This involved even more food and additional thunderstorms, and a pretty amusing game of Trivial Pursuit.

Now that the holiday is over, the kitchen has been returned to normal. Nooshkin is back in school and I am back doing the endless piles of laundry that have accumulated. At least there aren’t any dishes.

Check out these guys too

Insights and Inspirations from Israel Musicals

It's All Greek to Me

Live to Write - Write to Live

We live to write and write to live ... professional writers talk about the craft and business of writing

A community of readers

Liberating The Written Word From Capitalism Since 2014

Not quite bored, not quite occupied.

Delving into the world of fantastic baking!

The latest news on WordPress.com and the WordPress community.